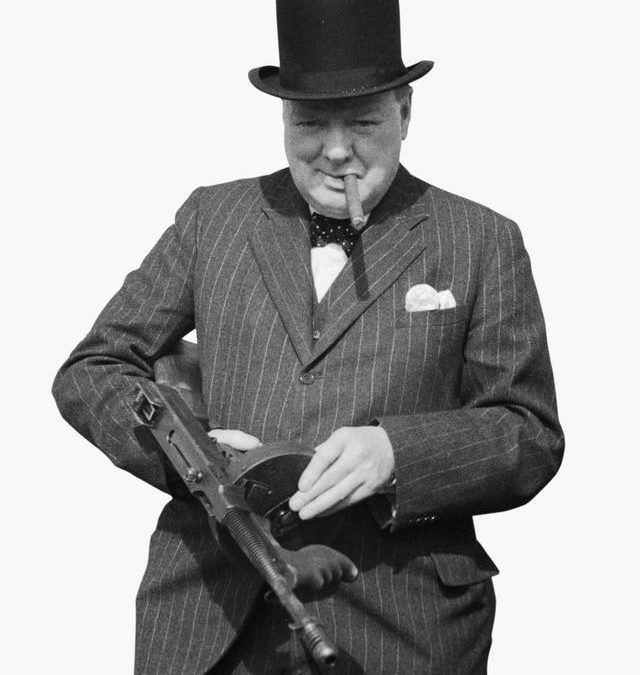 Cigar smoking is notoriously luxurious and enjoyed by aristocrats and successful individuals alike. The sophistication it eludes has been well and truly proven with the range of famous cigar smokers who have indulged in this pastime over the years.

Although our high-end selection of cigars incorporates the true spirit of the Caribbean, including our beloved Barbados, many famous cigar smokers have hailed from colder climates.

First and foremost, and one of the most famous was Sir Winston Churchill himself.

It would be rude not to start with one of the most iconic men in history, and as you may know, Churchill was partial to a cigar, or two, or three (or in fact, a lot more than that).

Whilst he was stationed in Cuba as a young officer, he discovered what was to be his future trademark prop. Many a time he was photographed with a cigar in-hand, or hanging from his lips, which conveyed an authoritative yet calm edge to anyone in his presence. The former British PM was known to stockpile a huge number of them at his home – along the lines of 4,000. Not only that, but he was also known to wear a specific flying suit when on a plane, something he had specially-designed, which enabled him to enjoy his beloved cigars whilst on a flight. This was especially useful for him on long-haul flights, when he would likely have a lot of work to do and plans to make.

Churchill was known to often choose cigars such as Romeo y Julieta when he wanted to put himself and others at ease, especially during hard, uncertain times.

Keeping with the political theme, John F Kennedy, the 35th president of the USA, was also a known-fan of cigars. Cuban cigars, to be exact.

From this, a rather unusual story can be told… Back in 1962, John F Kennedy was supposedly in search of a large amount of Petit Upmann Cubans. Said large amount was actually 1000 of them, which as you can imagine was a pretty hefty amount, even back then.

He proceeded to supply his press secretary with the instructions to collate them in just 24 hours, which could have been an impossible task for anyone not at this level of power. The short time frame was due to the fact he was on the verge of signing the very unfortunate (and very famous, for the wrong reasons), embargo. Said embargo would restrict Cuban products from entering the USA. His press secretary came through on the deal, and was said to have brought back 1,200 of them.

The prestigious actor has made a name for himself in the world of film and theatre, thanks to outstanding performances across the board. But, many people don’t know that Jack Nicholson has now switched from cigarettes to cigars. Many a time, he was photographed with a cigarette in hand, but in recent years, this has changed to cigars. Montecristo is known to be his cigar of choice, which is renowned for its coffee, vanilla and cream aromas, peppered with premium tangy tastes.

Mr Nicholson kicked his hefty cigarette habit for several reasons, although the main one was in order to feel better, of course. Plus, the switch also means he is able to indulge in the culture and background of cigar smoking more frequently. He reportedly also wanted to improve his golf handicap, which was apparently fast-deteriorating whilst chain-smoking on the course. It seems to have worked, as his handicap is now down to 12.

It’s safe to say we’re all familiar with Al Pacino, the gangster king of the film world, thanks to award-winning movies such as The Godfather trilogy, Scarface, Donnie Brasco, and Heat.

One of the most iconic props during these movies, most notably Scarface, where he played hardman Tony Montana, was the addition of a cigar in his hand. This has since become well-known the world over, and has elevated the cigar even further in terms of its masculinity. Paired with a range of swanky suits, and his own natural swagger throughout the film, this successful film star may well be one of the main sources of inspiration for those puffing on a cigar all over the world.

From film-star and bodybuilder to Governor of California, Arnie was introduced properly to cigars during a dinner with his in-laws, back in the 1970s. His wife, Maria, has been known to question her husband’s habit ever since, to which he has playfully responded by jesting that her father would have unlikely introduced him to something that’s bad.

Arnold has also been known to introduce other celebrities, such as Danny DeVito and Bruce Willis, to cigar smoking throughout the years. In the past, he has even hosted Monday night cigar dinners, with some of these famous faces said to attend. His favourite brands are said to be Cohiba and Punch, which, due to the strong and full-bodied, full-flavoured taste, show him as a pretty experienced cigar smoker.

It’s quite easy to see why these celebrities indulge in cigars – they elude power, luxury, and sophistication, and were often seen as a classic after-dinner ritual for the wealthy in years gone by. Although many of the famous faces with backstories are male, that’s not to say women don’t partake, too. And what better way to enjoy a premium, traditional Barbados, Cuban, or Dominican Republic cigar as a couple, whilst kicking back in the luxurious, warm surroundings of the bar at Platinum Coast Cigars. Drop in and visit us for a laid back, relaxing evening with the best-in-class Barbados hospitality, there’s no appointment necessary. You may also want to read about some of the most famous Rolexes used in films!